Can dogs and cats happily co-habitat, or do they just fight like cats and dogs? 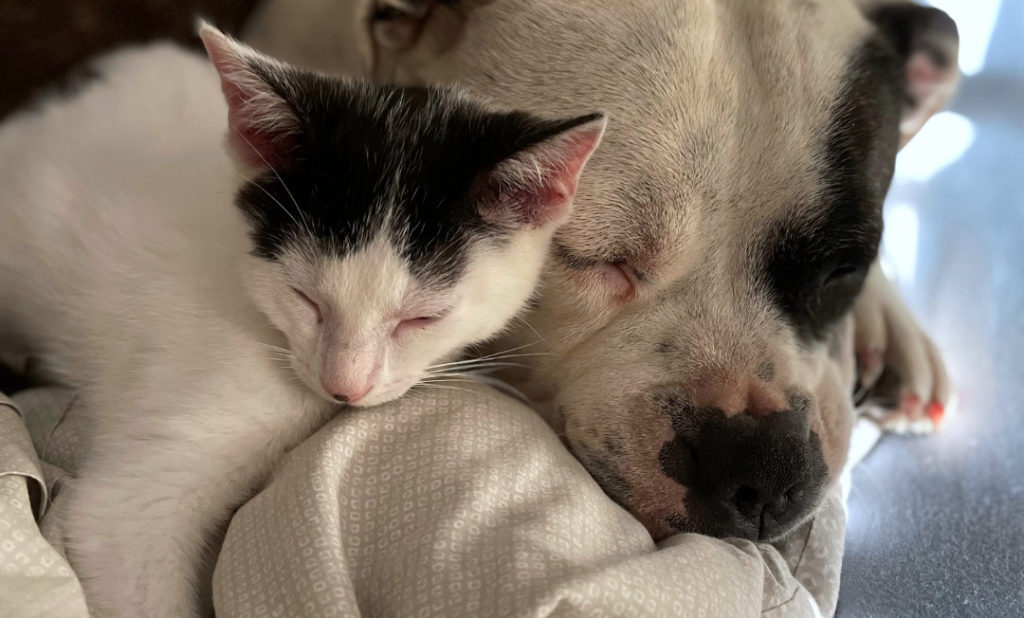 As pets to us humans, cats and dogs can be thought to perform a very similar role, but they are two very different species, with a natural instinct to fight or be wary of one another. Over time, this has led to the phrase “fighting like cats and dogs”. According to the Webster Ninth New Collegiate Dictionary, the expression “to fight like cats and dogs’ dates back to the 1500’s. But it was most probably a line in a Shakespeare play called ‘The Tragedie of Cymbeline: King of Britaine’ performed in 1610, where cats and dogs were referred to as ‘killing creatures’ that initiated the phrase we know today.

There are many reasons why these four legged furry peeps typically clash, other than just because they are different species. Prior to being domesticated, cats and dogs would have roamed around in search of the same food, both being carnivores, resulting in a furry food fight, full of intimidating woofing and hissing. Additionally, they have natural chasing and running instincts that can result in an impressive pursuit. Dogs will naturally chase whatever runs away from them while kittens run away when they sense danger.

The fight can then begin when the protective mother cats’ instincts fire up in protection of her babies being chased. Cats also tend to be very independent creatures enjoying time on their own, compared to dogs who are pack animals and usually thrive in the presence of company. Just think about how each species greets their humans when they come home each day, or how they would treat another of their own species. The excitement shown by dogs is certainly the polar opposite of an icy feline greeting!

That said, there are many owners of both cats and dogs who enjoy a harmonious household. This usually works best when both animals have been successfully socialised as puppies and kittens. This helps them alter their natural danger and threat responses, enabling them to understand that they can be friends and not foe.

If you already have either a cat or dog and hope to find a companion of the opposite, it is important to consider the temperament and personality of your current four legged family member. Each will still need their own space, beds, food bowls and so on, to feel safe, loved, and respected for the individual that they are, but with time and support, they will come to find their rhythm as welcome co-habitants. And, for a lucky few, a special companionship will develop, and your house will be blessed with two new beastie besties! Just like Mookie and Zuma pictured above!